Last night, I returned home from a long weekend of sailing the Apostle Islands in Bayfield, Wisconsin. While sailing the islands, we spent about an hour at Manitou Island, where there is a fishing camp. The camp has a ranger who shares information on the camps’ existence, starting with the last camp “governor.” All interesting stuff, but not the reason for today’s blog.

The ranger, Denise, is a really cool woman of about my age. She has led an interesting life of non-profit work. She has spent her lifetime moving from one position to another, allowing herself to move into the work that calls her, living in the moment as much as possible. She was called to the Islands last winter, and she was lucky enough, and had enough wilderness experience, to be selected for the role of interpreter this summer.

Her cabin on the island is solar powered. It provides enough energy for her refrigerator to run. She uses an outhouse. she has no means of transportation off the island. Her visiters to the camp include mother bears and their cubs. She picks various edible leaves to include in her lunch, leaving the berries for the animals. Once a week she gets a ride to town to shop for more food provisions. She lives very simply, and she is entertained for hours by the birds and spiders weaving webs. She had no idea what I meant when I told her I wouldn’t “tag” her on Facebook.

Her interpretation of the camp was wonderful, but it was our conversation afterward that drew me in. She asked each of our occupations, and I told her I was a wellness consultant for women and taught yoga and held women’s circles. She shared that she was attending a Grandmother Moon ceremony on Madeline Island in August (16-20). She had never been to one. I had attended two of these ceremonies, and so we discussed the ceremony at length. She was trying to encourage me to host a circle out at the camp. I mentioned that it probably couldn’t happen this year, but perhaps next year. We were both excited by the prospect.

Denise provided an excellent interpretation of life in its simplest form. 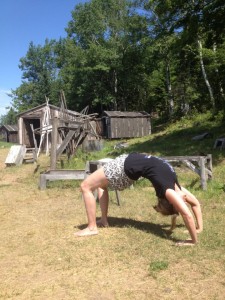 Wheel Pose at the Fish Camp