There is so much to digest from our week in Jamaica, some of it can be shared, some of it stays on the island. But I feel the need to write about our blessed Jamaican Retreat. This first blog is about my first impression of the security of Bromley, which is often stated as a concern when people come to Jamaica. Let me note, I never once felt unsafe at any point of my travels throughout the countryside of Jamaica.

Upon our arrival, we were greeted by the dogs, Meatball, Nettie, Nelson, and, later on, Spot. Their purpose is twofold. Besides being beloved members of the family, they are meant to protect the people of Bromley. Their insistant barking lets others know of the arrival of anyone to the pen, or farming homestead. This is important in terms of security. Jamaica is a poor country, with 14% unemployment but also 40% underemployment. The government allows the people to squat on others property, and so you will find very simple homes made from scrap metals and other discarded materials lining the roadside. You will also find small business entrepreneurs selling fruits and trinkets they’ve made, as well as the better off small businesses selling cheap t-shirts and sarongs made in China. Of course, the Great Weed of Jamaica is also easily bought on the side of the road, I am told.

Poor people sometimes become desperate, and so security is a bigger issue in Jamaica than where I am from. At Bromley, there is a night guard who stays awake and walks the property, keeping an eye out for mischief. However, I was never afraid to sleep at night, though I was disturbed in my dreams one night by a ghost. It was a dream, as I later learned that there is only one ghost who currently resides at Bromley. The others were sent away in a cleansing ceremony.

The ghost of Bromley is LaVeana, and I am sure I am spelling that wrong. They think she lived at Bromley in the 1800s. She is another source of protection for the inhabitants of Bromley, so they allow her to stay. She was a house staff and likes things to be orderly. There is a story about some guests getting into a terrible argument while staying their first night at Bromley, and, when they woke in the morning, they said they had had a terrible night and would not spend one more minute on the property. Alex and Jonathan, the owners, said they think Laveana made their night uncomfortable and let them know their behavior was not welcome.

The dogs slept on the veranda of the place I stayed at, The Schoolhouse, each night, so on occasion, I would hear them shuffle around outside my windows, and once in awhile during the week, I would hear their nails screeching across the wooden planks noisily, barking madly, at whatever intruder entered the property, typically another dog. On the last night of our stay, I awoke around 4:00 to the sound of a dog fight. Having lived in the country for the past 23 years, I first thought, coyotes fighting. But in the morning, we learned mischievious Meatball had gotten into a serious fight with another dog that had intruded on the property. He nearly lost an ear. In fact, I am waiting to hear if the ear was lost or not. Poor Meatball. Someday we will have to write a blog just about him.

I invite the others who attended the Jamaican Retreat to add their thoughts to these blogs. Just sign up and then you can respond to the blogs. More tomorrow. 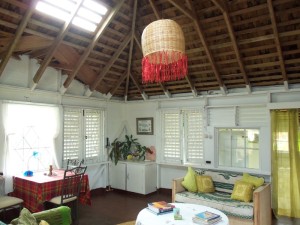 The living room in the Schoolhouse