So my first blog addressed the security of Jamaica. Prior to our trip, and even in my classes back today, I had several people ask me if we felt safe there. I needed to address that big elephant in the room first. So I reiterate, we felt perfectly safe our entire trip, and our hosts made sure we WERE perfectly safe during our trip. It was all good!

Now, there was another first impression which has to do with Bromley itself. As I mentioned, the dogs serve two purposes. Their main purpose is as the beloved pets of Alex and Jonathan. When we showed up on the bus, they showered us with greetings and salutations, as only dogs can do, in their bark talk. With four of the five of us in this first arrival group dog lovers, we were immediately smitten with the dogs. They are so friendly and accept a pat on the head or a scratch of the chin freely. So in our eager anticipation to introduce ourselves to our hosts, we had to trip over a few friendlies before getting to them!

Alex –  what a beauty! I had to hug her immediately. We had conversed by email prior to the trip, and I had told the ladies she had won my heart with her first email, when she stated, “look forward to meeting you and making this a really groovy intimate retreat.” Anyone who says “groovy” is my kind of person! Alex was so down to earth and laughed all the time. She has a bit of wicked humor, which we all loved and joined along with her. She fit right in with this group of women. Our ages were in the forties and fifties, we shared so many common experiences, and we all enjoyed laughing at our silly life stories. Alex proved to be very efficient as a host. She had met all my requirements and added surprises to our days and nights. These will be discussed later, but let’s just say, the excursions were so well thought out and met all of our needs throughout the trip. And what a cook Alex is! I will go into more details about that in another blog, but let’s just say, that lady can throw together the healthiest meals like there is no effort on her part, which I know there was. We fell in love with Alex that first night, and she will always be remembered fondly.

Jonathan is Alex’s husband. He introduced himself to us as the butler and chauffeur, and had us laughing from the start. He often referred to me as “teacher,” which I found heartwarming and funny. He pretended to complain about Alex spoiling us (she did), and he provided us with many stories of Jamaica, its past and its present. He was the historian. We enjoyed hearing about his growing up in Jamaica, then leaving for California during the more tumultuous 70s in Jamaica, only to return in the early 80s after serving in politics in California. After his return in the 80s, he committed himself to the responsibilities of Bromley. He runs the entire company in Jamaica, as well as other companies, I was told. He is forever busy with one of his businesses, but I can tell he truly enjoys it.

Life is good for Alex and Jonathan. I would suppose that is because they live at Bromley. Bromley is a Pen House, which we learned is the name used for a farming business. Because of the size of the house and the spread of living spaces on the property, it can be confused as a Great House, but that title is used in reference to places that raise(d) sugar, once Jamaica’s main industry. Bromley always raised cattle, and still does today. Our rooms in the Pen House, my rooms in the Schoolhouse, and Lis’s rooms in the other building, were spectacular. everything retained the dignity of the past, with splashes of new in the artwork and decor. An old book on the coffee table might sit underneath a small glass votive candle holder. The windchimes from California provided a stunning invitation to enter the thick wood front doors with iron gates. The modern artwork hanging on the red walls of the large dining hall provided a wonderful contrast to the stately darkly stained dining table and side cupboard. The wooden exposed ceilings hinted at the history of some of the buildings used formerly as outbuildings. The colorfully painted and tiled bathrooms on the outer sections of the buildings reminded us that, at one time, these bathrooms weren’t here and the space was just part of the wrap around verandas. You can smell the weather at Bromley. You can feel the weather at Bromley. Damp with the moisture of a tropical island, a slight waft of a breeze from the north sends the hint of salt from the ocean into the air.

All of us women agreed that Bromley is the perfect location for a yoga retreat. As I commented upon returning, at Bromley, you feel present: never worrying about the future or fretting about the past. “Just this.” 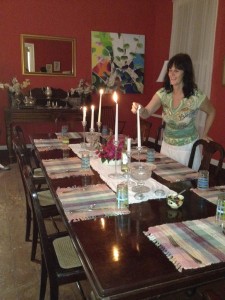