The common thread that linked this group of women was yoga. Each of us had practiced yoga regularly, but most had a practice of once or twice a week. One was a lapsed yogini, with life situations that kept her from a regular practice. So the group was a little apprehensive about practicing yoga two times a day.

Our first evening of practice was a nice, calming practice meant to stretch out any of the kinks from our flights to the island, as well as relieve any lingering stress from the body. We practiced about 90 minutes after dinner. We had decided to practice later that night because Lis was flying in, late afternoon, and we suspected she might be hungry. Also, I wanted to have the experience of yoga in the moonlight. During the rest of our stay, we would practice yoga prior to eating, and we still managed to get some of the sun setting, since it sets about 6:15-6:30.

Each of the 13 yoga classes that week were different, with focuses on different areas of the body or mind. We worked to open our hearts, to strengthen our immune system, to stretch the hips, to clear the chakras, and to open up our communication. We had one class of playing with more advanced poses. It was the day we climbed up and down a large hill to get to the river, so not everyone participated (exhausted from the steep climb), but we had fun with it. And occasionally someone took to the wall to practice a headstand. We even worked toward eight angle pose, playing with elephant trunk pose. Another class focused on a foot massage at the end of our practice.

After each meditation, we took time to journal. For some of us, this was a new experience, and so thoughts to paper came more slowly. But it was okay; even jotting down a few words to remind us of our meditation thoughts was enough to make the experience “real:” something tangible which we can go back to read at a later date, to remember our experiences.

The most important lesson the women learned from practicing yoga mornings and evenings each day, is that they can DO IT. And that they enjoyed it. One of the women in the group has told me that she has been practicing a few asanas on her own each day upon our return, as her body is craving that morning movement and connection of the body, mind, and spirit. 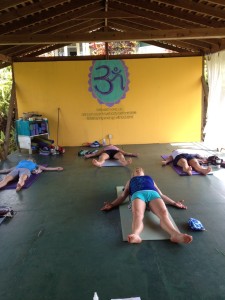